The European tyre label has been mandatory for new tyres since 1 November 2012 and applies to passenger vehicles as well as light and heavy industrial vehicles. The European Commission has passed a new decree concerning the EU tyre label. As form the first of May labels on new tyres will become more visible, accurate and future-proof. 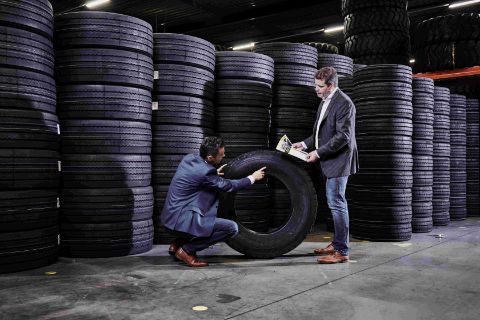 Explanation of the tyre label

All new tyres are issued with a label, which represents a performance index in 3 sectors. One of the characteristics expressed by the tyre label (or sticker on tyres for passenger vehicles and light trucks) is rolling resistance (= fuel consumption). These categories range from A (low) to G (high). The tyre label also features information about grip on wet road surfaces (= safety), which is also categorised from A to G, and the external noise created by the tyre, expressed as a certain value. The label allows users to select efficient and safe tyres based on fuel consumption, grip and environmental burden.

What do the icons mean?

The tyre label is based on a European directive aimed at improving road safety, reducing fuel consumption and CO2 emissions, and reducing noise produced by road-based traffic. What do the three icons mean:

* Tyres must comply with minimum performance limits in order to be permitted to the European market. No longer permitted since 1-11-2014: tyres with a Rolling resistance of G and a Grip on wet road surfaces of F.

The European tyre label was introduced in 2012 and has now been improved. As of 1 May 2021, when the new label becomes mandatory, you will be able to make better choices based on heightened awareness and several new criteria: mileage, wear resistance and grip on snow and ice. Furthermore, from 1 May 2021, the tyre label will also apply to heavy commercial vehicles, which do not have a label at present.

From a visual perspective, you will be able to easily recognise the new version of the European tyre label. For instance, it is based on the EU energy label, which is used to assess a variety of electrical appliances. The original pictograms will be retained.

According to the Commission, the new rules will result in energy savings that are equivalent to 4 million fewer cars on the EU's roads. That's why Miguel Arias Cañete, EU commissioner for Energy and Climate Action, is delighted with this initiative: "Energy efficiency also applies to the way in which we drive. By switching to the most energy efficient tyres, European citizens and companies can significantly reduce their fuel consumption, while saving money and helping the environment. This is part of Europe's approach to genuine energy security and climate protection".

Select suitable tyres for your situation even faster

The main advantage of the new label is that it allows you to select suitable tyres for your specific situation even faster and more efficiently than before. In addition, you do not have to do anything once the new legislation comes into effect. We will make sure that the information needed for our whole range is accurate and freely available.

Save money with ‘green’ tyres

The better the label (thus lower classifications), the greater the efficiency benefits in practice. The German institute TüV supervised practical research at synthetic rubber manufacturer Lanxess, which led to some surprising conclusions. For instance, a tanker featuring ‘green’ B-label tyres realised a saving of 8.5%, over a distance of 40,000 km, compared to an identical tanker featuring standard tyres from category D.

Example demonstrating benefits for transport companies:
Here is a sample calculation: a transport company with a fleet containing 300 40-tonne trucks, featuring tyres with a rolling resistance of D on the European tyre label, will be able to save 1.5 million euros in fuel per year by selecting tyres with a B label. Assumption: each vehicle drives 150,000 kilometres per year and fuel costs 1.40 euros per litre. In this example, the reduction in CO2 would amount to over 3,000 tonnes per year.

What is the main purchasing criterion?

In terms of a company's overall efficiency, it can be more beneficial to select slightly more expensive tyres with a lower (= better) label instead of cheaper tyres.

Do you need advice? Please contact us, our experts will be pleased to assist you. Contact our experts at +31 (0)523 - 850 850 or by e-mail to info@heuver.com. You can also read all about trucks on the truck knowledge-page.