Family within a family business: Mark Potze and Dennis Hulsdouw

Who still works in a family business these days? Well, we do - at Heuver! And we enjoy it too. In fact, there are also many other family relationships in our company. This series highlights these relationships via the personal stories of employees. Like the story of brothers-in-law Mark Potze and Dennis Hulsdouw. 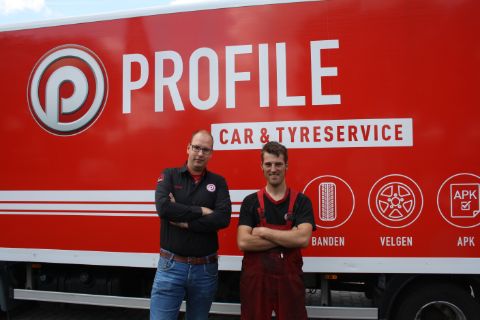 From Groningen to Emmen, and back to Veendam via Assen

Mark Potze (27) works as manager at Profile Heuver in Veendam. “But this is not where my adventure started at Heuver. In 2011, I was still at school studying MBO Human Technology, but was looking for a job. That is why I applied to Heuver; my application was accepted and I was given the chance to complete my studies. In the meantime, I could start work at Profile Heuver in Hoogkerk. It was not the field sales job I had envisaged at the time, but I was able to do admin work and manage the guys in the workshop. I then worked on the front desk in the Groningen branch, and later went to Emmen, back to Assen, back to Emmen again and then back to Assen again. I was then given the position of manager in Veendam four years ago, and am very pleased to still be working here.”

Dennis Hulsdouw (27) is the brother of Danielle, who is in a relationship with Mark. Just like his brother-in-law, he was worked at various Profile Heuver branches: “It all started with a vacancy that I applied for in Groningen. They opted for someone else on that occasion, but another vacancy materialised soon afterwards. They still had my CV, and Mark gave them a little nudge by putting in a good word for me, which involved telling them that I had good mechanical know-how. Things went very quickly, and I was working for Profile Heuver a week later. I then left Groningen, where I started as tyre changer, to spend a bit of time in Veendam. After a while, I received a phone call from the head office in Emmen, to say there was a vacancy. That was two years ago, and things went so well that I now have a permanent contract. I work as deputy mechanic in the meantime, and do everything except MOT's. I have really enjoyed things; this is really the place for me.”

Both men really appreciate the hands-on mentality at Heuver. A perfect example of this is when Dennis had his first working day in Emmen: “I spent no longer than 5 minutes talking to manager Harry Lamberink, and could then get my tools out. And once I had arrived, I was not going to leave. I think that's typical of how things are here.” Mark adds: “A lot of ideas are also exchanged, so things can be done quickly. If I need a tyre that is located in Emmen, I ask Harry if he wouldn't mind giving it to Dennis, who can then deliver it to me in the evening. I can then use it the following day. Such things aren't a problem here.”

Both men have been brothers-in-law for almost ten years and have spent the past few years working together at Heuver. So it's logical that they also talk about work when they meet up away from Heuver, says Mark: “Of course, we know the same people at the various branches, and are curious about what is happening at each other's place of work.” Heuver is a family business, and Mark says this is noticeable in the short lines of communication with the board: “I can always get in touch with Bertus Heuver. Naturally, the company is growing and this is having an impact on the contact you have with others in the company. But Bertus certainly does his best.” Dennis has also experienced the company's personal nature, he says: “When I first started working here, I celebrated my birthday shortly afterwards. I then received a handwritten birthday card from Bertus Heuver. And that is not something you experience every day in a large company, but it's normal here. I also think there are very few companies that organise better parties than Heuver; the personnel party and the New Year's party.”

Heuver has grown considerably as a wholesaler, but its Profile branches have also grown. So, in the meantime, it's no surprise that not all employees know one another, adds Mark: “That's normal, but also a little unfortunate. I have noticed that the distance between wholesale activities and Profile branches is also increasing. For a family business like Heuver, the big challenge is to keep the atmosphere in the company similar to what it's always been, despite the growth.”

Please contact our experts at +31 (0)523 - 850 850 or send an e-mail to info@heuver.com. You can read all the news articles on our news page or read our expertise on our knowledge-page!